Is It True? Are There Really Pharmaceuticals in our Drinking Water?

When the World Health Organisation decides to commit to a study on pharmaceuticals in our water, you know there's a reason.

Here's an excerpt from the study.

Pharmaceuticals are synthetic or natural chemicals that can be found in prescription medicines, over-the-counter therapeutic drugs and veterinary drugs. Pharmaceuticals contain active ingredients that have been designed to have pharmacological effects and confer significant benefits to society. The occurrence of pharmaceuticals in the environment and the water cycle at trace levels (in the range of nanograms to low micrograms per litre) has been widely discussed and published in literature in the past decade. The increase in detection is largely attributable to the advances in analytical techniques and instrumentation. Many surveys and studies have confirmed the presence of pharmaceuticals in municipal wastewater and effluents, and these have been identified as a major source of pharmaceuticals in drinking water.

So yes, it is in our water. It comes from many sources, but one that surprised me was the simple act of taking a dip in a river. It appears that if we are ón meds', then we are also sweating them out. This med-laden sweat ends up in the water.

Activated carbon is the simplest way to reduce pharmaceuticals in your home water. No, we can't tell you exactly how much of every pharmaceutical they will remove, but the WHO report recommends their use.

(In my filter, I use catalytic carbon - around 8 x more effective than common activated carbon.)

Carbon, the report says, can achieve high removal of pharmaceutical target compounds, especially hydrophobic compounds. As with all contaminants, removal efficacy is a function of contact time, organic loading, chemical structure, solubility and carbon type (Ternes et al., 2002; Yoon Y. et al., 2003; Snyder et al., 2006) And there are some that are still resistant, such as: Iopromide, ibuprofen, meprobamate, sulfamethoxazole and diclofenac . (Khiari, 2007).

Here's my take on this issue.

1. It's a good thing we know about the problem.

2. The amounts of pharmaceuticals in our drinking water and their effects on us will relate - obviously - to how much tap water we drink.

3. We have had people criticising us about being alarmist to sell water filters.
I understand where they are coming from. The world has two kinds of people: those who believe they are taking in contaminants in a therapeutically negative amount, and those who simply choose not to believe it despite the evidence.

4. I am inspired by Erin Brockovitch more than by the Managing Director of Monsanto. Erin understood that we are all living on a polluted planet. She acted to change her region, and she succeeded.

A report I read some years ago concluded that an average US female had a minimum of 600 contaminants in the body.

So yes, pharmaceuticals in your water are still what our experts label as low dose. But we all know that's not all, is it? There's the carcinogenic chlorine, its nasty co-carcinogen chloramine, there's brain affecting fluoride, lead from old pipes.... and that's just the water!

I prefer to see myself as a pragmatist than an alarmist and what I do with the lives of myself and my family matters first to me. In my position I read hundreds of reports on adverse water quality.. but I don't snasties.ee it as the total picture. I see it as a factor I can affect - something I can consciously subtract from the daily list of contaminants I have unthinkingly absorbed and stored. By doing so I'm reducing the possibility of a tipping point event where my body metabolism simply gives up due to the overload of 'safe'doses of hundreds of nasties.

Here's my personal bottom line. What's yours?
If indeed we do already have hundreds of different contaminants in our cells, my awareness gives me the chance to begin dismantling this growing threat to my health, even if I have to do it one by one.

I can't dismiss the obvious observation that as a nation we all seem fat.
And yet we are also also seeing stranger symptoms. Manboobs. Sterility. Ongoing seemingly infinitely variable undiagnosable symptoms. As I see it, it's very likely that these unheard-of symptoms may relate to a toxic soup of contaminants from all of the sources I mentioned earlier. Fat may simply be inflammation. medically speaking, it's called chronic low level inflammation. Hmm. that word again. "Low level".

I can't remove all of them..
well, I may be able to - but it'd be a concerted and painful detoxification process... but I do have the power in my own hands to identify their source, and do whatever it takes to remove them from my life.

To answer my critics who say I'm just trying to sell you a water filter.. yes, they are right.

But is there anyone else who has alerted you to the problem and handed you a solution? No.

If a doctor walked up to you on the street and said I am a doctor and I can tell you have .... disease, would you judge him for it?

I'm not a doctor. I've only spent the last 18 years studying our drinking water and supplying solutions.

So you make the call.
Am I worth listening to? Or am I just trying to sell you something? Or both?

I am the inventor of what I believe is the most advanced simple water filter on the market. We've broken the rules of the industry - one that (I have observed) prefers to tell the customer as little as possible about how well their products really work.

I have taken the steps to test its capability for the whole of its life: something I've never seen done before for any water filter. I've had it approved by the EU safety committee. I've run it through an exhaustive University lab. I've sourced every filter media from USA rather than the far east. I am proud of what I and my team have achieved in helping over 20,000 people, and receiving their letters of gratitude.
Learn more about my invention, the UltraStream here
Download the WHO report on pharmaceuticals in our water here

Thanks for your time!

pharmaceuticals drugs
Related stories
Microplastics water filter water Bottled Water Scientific Studies Chlorine Water Toxins Water Filtration 6 min read
If an Alien Asked You What You Were Made of, What Would You Say? Drinking Water? 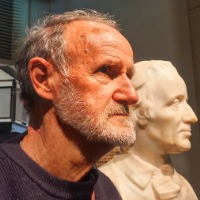